Parx Racing was formerly known as Philadelphia Park and is located in Bensalem, Pennsylvania. The track opened in 1974 under the name Keystone Racetrack, become Philadelphia Park in 1984 and transitioned to its latest incarnation in 2009. With the influx of gaming revenue, the Pennsylvania breeding industry has blossomed and was in the national spotlight in 2004 for Penn-bred Smarty Jones’ bid at the Triple Crown. The track hosts year-round live racing.

Parx Racing has a one-mile dirt oval with a 1 ¼ mile chute. The surface is made up of a mixture of sand, clay and loam. Because the track races year-round, the surface needs to be able to withstand a variety of weather conditions. The turf course is seven-furlongs with a 1 1/8 mile chute. 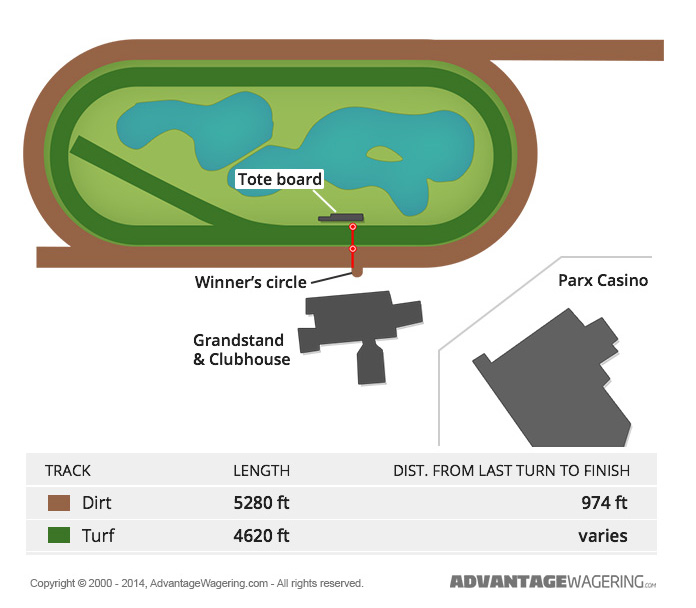 Parx Racing is home to several marquee stakes races including the Pennsylvania Derby, a Grade 2 for three-year-olds with a coveted purse of $1 million. Also held on Pennsylvania Derby Day in September is the Cotillion Handicap, a Grade 1 for three-year-old fillies that also boasts a purse of $1 million. Both races serve as key prep races for Breedes’ Cup events in the fall.

Contested at a mile and an eighth and held at the end of September, the Pennsylvania Derby offers three-year-olds one final chance against age-restricted company before tackling older horses. With a $1 million purse on the line, the race traditionally attracts some of the top sophomores in the country. Top horses such as Broad Brush, Summer Squall and Macho Uno all won the Pennsylvania Derby and in 2013, Will Take Charge won the race en route to champion three-year-old honors.

The Cotillion Handicap has been a race with rich history since it began in 1969. Some of the top fillies in history have used the mile and a sixteenth race as a stepping stone in remarkable careers. Havre de Grace may be the most noteworthy winner as she holds the stakes record of 1:40.93 The Cotillion was her coming out party and established the talented filly as a star on the rise. The following year, she delivered with a Horse of the Year campaign.

Three-year-old sprinters shine in the Gallant Bob Stakes, a Grade 3 event with a purse of $300,000 that is run at six furlongs. Also run on Pennsylvania Derby Day, the sprint race traditionally attracts large, competitive fields. In 2013, Clearly Now ran a game second as the favorite to longhot winner City of Weston and has since gone on to establish himself as one of the fastest six-furlong specialists in the country.

Find the best odds for your horse online and place your bets within minutes !

The Grade 2 $1.25 million Pennsylvania Derby features the two biggest names from the Triple Crown trail September 24 at Parx as a field of 12 gathers in one of the most intriguing betting races of the year....